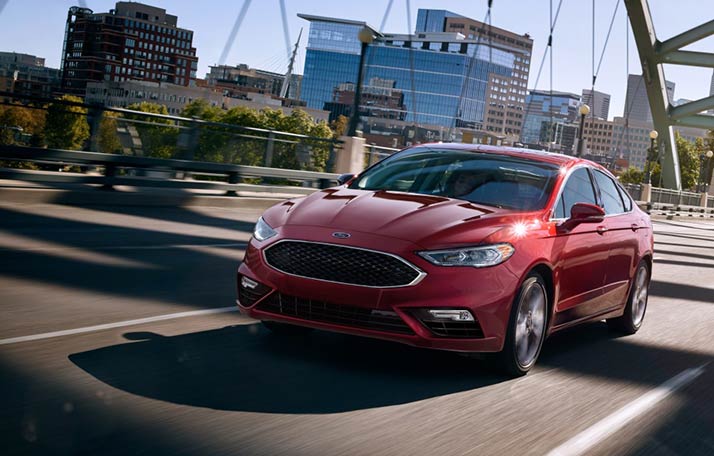 
The Ford Fusion is quickly becoming America’s favorite model. The 2017 model year comes with several options, from powertrains to trims. You can select the standard model, a hybrid system, or sporty trims. The new 2017 Ford Fusion also has next-generation technologies when it comes to safety and infotainment, as well as a design that’s bound to make other drivers jealous. Here are just some of the many features on the new Ford Fusion.

Engine Options
There are multiple engines to choose from in the 2017 Ford Fusion. Below is a list of offerings:
When properly equipped, this model gets up to 325 horsepower and 380 lb-ft of torque with the V6 EcoBoost engine. The Plug-In Hybrid engine gets up to 104 MPGe when it runs on pure electricity, among the highest in the industry.

Infotainment Technologies
The 2017 Fusion has the latest technologies as well. This model comes with the updated SYNC 3 system and available SYNC Connect. You’ll also find the SmartGauge with EcoGuide on select models, as well as Regenerative Braking and Brake Coach on hybrid models. The EcoSelect and EcoCruise options are great for optimizing efficiency, while voice recognition helps you access media safely as you drive. Plus, this model comes with SiriusXM Satellite Radio so you always have access to the best music.

Safety Technologies
In addition to entertainment and eco-friendly innovations, the new Fusion also has a suite of driver assist options. These include Pre-Collision Assist, Enhanced Active Park, BLIS, Cross-Traffic Alert, and Adaptive Cruise Control. You can also opt for features like Lane-Keeping, while some features like a rearview camera come standard.

The Fusion is great for any driver thanks to its extensive list of options. If you love entertainment technologies, the Fusion has a long list. If safety is your priority, have no fear—the Fusion has award-winning safety. Or, if you want the best in efficiency, the hybrid Fusion options are great as well. Nothing compares to the new Fusion. Find your dream car at Tropical Ford today.
- + Disclaimers